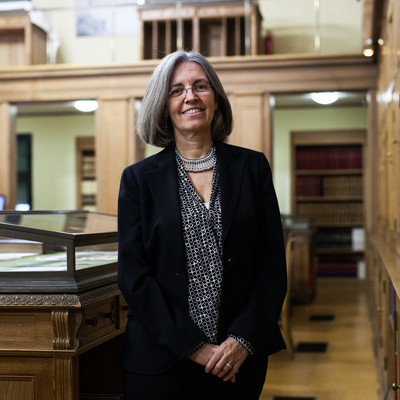 Maria Georgopoulou was trained as an art historian and her scholarly work explores the artistic and cultural interactions of Mediterranean peoples in the Middle Ages. She holds a Ph.D. in Art History from the University of California, Los Angeles, and taught at Yale University (1992-2004) where she also founded the Program for Hellenic Studies. She is currently the Director of the Gennadius Library at the American School of Classical Studies in Athens. During her tenure, the Gennadius Library has expanded its academic offerings and developed new outreach programs to attract and educate an ever wider audience.

The role of women in exploring, understanding and archiving the past

Exploring the position of women in the American School of Classical Studies at Athens (founded in 1881) offers insights into the various roles that women have played as archaeologists, conservators, librarians and archivists in the twentieth and early twenty-first century. From the first woman to be accepted as a Member of the American School in 1885 to the installation of the first woman director of the School (Jenifer Neils) two months ago, a lot has changed. Yet, there is ample evidence to suggest that women today are still underpaid and lag behind men in the higher echelons of the academy. What can the history of women in the American School teach us about access to science?

Often obscured in the shadow of their husbands, educated American women in the beginning of the 20th century had to reinvent themselves in order to find a worthy occupation that would befit their skills and aspirations. The first women archaeologists at the American School strove to gain a position worthy of the excellent training they had received in the American Women’s colleges. Stereotypes pushed them to the exploration of more “domestic” topics, minor objects like the cataloguing of small finds, as well as to administrative and organizational duties. It is instructive that the first woman ever to direct an excavation on mainland Greece, Hetty Goldman, believed that the only reason she had been allowed to excavate at Halae was to get her as far from Athens as possible; so hostile to women excavators was the tone at the American School in 1911. Twenty years later, despite the fact that women were outshining the men who took the exams to win fellowships at the American School, it was proposed to establish a fixed ratio of fellowships between men and women, one that would award many more to men.

Revolutionary ways to record archaeological finds such as iDig (an app that allows field archaeologists to record excavation data easily, accurately, and consistently in real time, then process and share it quickly), open access to an ever greater volume of digitized materials from the libraries and archives of the American School, and sharing this findings with a larger public exemplify the vision of the American School in the twenty-first century to serve a greater community of scholars. Doing archaeology well means much more than recording finds and constructing heroic figures, however; it is also about appreciating the unspoken process by which all this was made possible very often because of silenced heroes who painstakingly have cleaned, archived, photographed, and organized things. The work of the School is the collaborative product of many teams not just of “leaders.” Take a look at the blog From the Archivist's Notebook. Essays Inspired by Archival Research in Athens Greece, an ingenuous tool to explore the history of the School by Natalia Vogeikoff-Brogan; the information is there in plain view for all to see.

DAY 2 - 09:15 Plenary: Open for All? Diversity and Disparity in Open Science